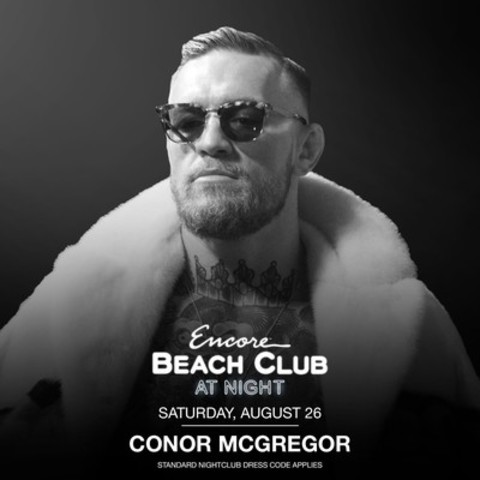 It’s finally here. The moment boxing and MMA fans have been waiting for…the Mayweather-McGregor fight is about to happen this weekend on Saturday, August 26th at 9PM at the T-Mobile Arena in Las Vegas. If you are headed to Vegas to see the fight in person, lucky you, tickets have been selling out for record pricing of up to $2,000 or more for ringside seats.

The After Party At Wynn Encore Beach Party Will Be EPIC

McGregor himself will make an appearance either way, win or lose, at the afterparty hosted by Wynn’s Encore. He’s signed a four party deal over a two year residency to show up after his scheduled fights. Party the night away with this underdog, hopefully winner of this Saturday’s fight? Yes, please!

The fight itself is only airing on Showtime Pay-Per-View, so if you want to view it at home you’d better sign up soon. Many sports bars, casinos, and Vegas clubs will be showing the fight live, so you’ll have plenty of company if you want to see it surrounded by fans and friends to maximize the excitement of this once in a lifetime event. This is going to obviously be the fight of the century as two sports giants come together in battle. The only better fight you’ll see this year is maybe Thor battling Hulk in Marvel’s upcoming “Thor Ragnarok” movie.

Will McGregor Knock Mayweather Out Of The Ring?

As the reigning UFC Champion, Conor McGregor’s background in mixed martial arts is legendary. From Ireland originally, he started his professional career in 2008 and has been winning titles and accolades ever since.

Floyd Mayweather Jr. is an undefeated professional boxer, fighting pro since the late 90s after winning a bronze medal in the 1998 Olympics. He is commonly referred to as one of the best defensive boxers in history.

It remains to be seen how these two will match up in the ring. Some say that it’s only in Mayweather’s later years that he would even consider a fight like this with someone like McGregor. Odds are that everyone will have a blast watching this spectacle, but it’s up for grabs who the winner will actually come out to be. Will you be watching this weekend?

VivaVegas.TV is the largest and most successful events and media company in Las Vegas.

– The most fantastic promo models on the planet, the #VivaDolls

For more info or to book us contact Sancho Van Ryan

Mayweather VS. McGregor: Recap On The Fight Of The Century